We're in Germany at the moment, and had a lovely day out the other day at the Lochmuehle. 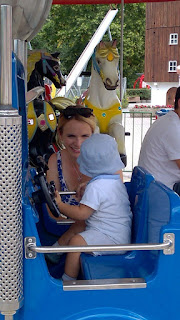 It's an activity park for little children, with animals to pet, and old-fashioned rides like carousels and giant slides with mats to make one whizz down at triple-speed.   It struck me just how much of what we do with our children is explicitly nostalgic.  On reflection, I also have to admit that I choose to dress my younger son in quite obviously nostalgic clothes (my older son has always been so obsessed with dressing up as other characters that I rarely have a choice as to what he wears!)  On the face of it, it's really strange to nostalgically and deliberately associate childhood with the past - after all, the children of today represent the future.


Why do we so often approach bringing up children with such a strong sense of nostalgia?  I don't know the answer, and I'm not going to change the kinds of things I do with my kids - I love carousels, and traditional lemonade, home-made cakes, and old-fashioned rompers and dungarees.

I think it may lie partly in the desire to relive our own childhoods - we're tempted back into our own eras of innocence and trust.  And I wonder whether it also connects to our sense that childhood should be about stability, and that traditional and old-fashioned things are somehow timeless.  We tend to associate the modern with fashion, changeability, and the transient.  Indeed, clothes with a more 'vintage' feel are often described as being of 'timeless appeal'.  Is there then a sense that we're endowing our kids with a childhood that transcends time?  Maybe I'm reading too much into it, but it is striking that this repudiation of the modern is particularly associated with our attitudes to small children.
Posted by nowandthen at 15:34