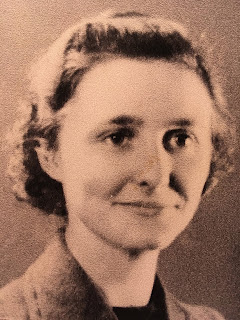 This is my grandmother.  She is one of the people I have most admired in the world.  She died quite some time ago now, but she remains one of my greatest inspirations and most formative influences.  We knew each other so well that even though she is no longer here, I can have interior dialogues with her about things which bother me, because I can imagine what she would have said.

Many medievalists are interested in the idea of ancestors - and indeed the concept of ancestry, formulated differently at various points in time, was a fundamental way of evoking dignity, authority, and litanies of values.  I've been trawling through medieval English petitions on the hunt for expressions of nostalgia, and some of the search terms I have been using is 'ancestors', 'grandfather', 'predecessors' etc.

But just referring to one's ancestors is not enough on its own to indicate nostalgia.  When I think of my grandmother, there is certainly a tinge of nostalgia for times spent together (we recently scattered her ashes, and my mother produced an amazing selection of her recipes which certainly was a journey of nostalgia in taste).  But my thoughts of her, and my evocations of her aren't really about nostalgia.  They are about admiration for her wit and her integrity.

All this to say, that as a historian I should be very careful about taking references to ancestors as indicators of nostalgia.  On occasion, such evocations might be signals of nostalgia - but admiration for someone in the past may be not so much a longing for a former time, as a sense that one's connection with that person stands above time.  This is certainly the case for how I think of Mum (I called her this because my mother did) - quite apart from the fact that I'm acutely aware of the incredible education and opportunity which was denied to her and open to me.  I do miss her though.